No, affiliate marketing is not illegal. But to my surprise lots of people don't know that.


Showing Off My New Site

I'm pretty proud of my new SiteBuildIt! site. Although I've been blogging for several years, it is my first "real site". The articles are thoroughly thought out, unique and well written. So I have been showing it to my friends and relatives. I was amazed to find out they don't share my feelings.

First thing everyone asks is how I'll earn money with my site. When I tell them about affiliate marketing, they all get suspicious and ask if it is legal.

My friend asked me "is this some kind of pyramid scheme thing?". Those are illegal in plenty of countries.

But SBI and affiliate marketing are not pyramid schemes.

In pyramid scheme you'll have to pay to join in, but you don't receive anything concrete. You'll main job will be to get new recruits and you'll get paid when people join in. That is the whole business, even though some schemes have some "bonus" that is supposed to be paid when a certain amount of people have joined in. Other disguise as multi-level marketing by having some product tangled in. 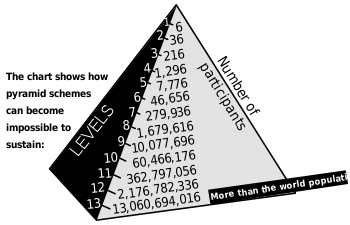 As the pyramid scheme would require exponential amount of participants, it is destined to crash. The few people in the bottom of the pyramid get rich and the mass of the people joining later will just get cheated.

Multi-level marketing is a marketing strategy where you benefit from both your own sales and the sales that your recruits make. You all will be selling a real product and MLM is legal.

The problem is, many pyramid schemes disguise themselves as multi-level marketing. Fraud.org has this excellent table that compares pyramid schemes and MLM. As you can see, it may be sometimes hard to separate a real MLM program from an illegal pyramid scheme.

As said, SBI sites and affiliate marketing are not pyramid schemes. Most of them are not MLM either, as you will only get paid for the products that people buy through your links. You don't earn more if others end up being affiliates themselves.

I do recall that in SBI affiliate program there is a small "second level" payment too, but real MLM programs are several levels deep. Also, getting new affiliates is not the SBI main business. SBI is a course that teaches people to build profitable web businesses. You can buy SBI and never become an affiliate.

Of course, SBI site owners are individuals and nothing prevents them from being fooled joining into a pyramid scheme! So when selecting your affiliate programs, be careful.

But my site does not contain undercover marketing either.


What, Huh! Are You Serious?

Yes, that's what I thought too. I think that is ridiculous. If you receive a gift, you can opt to write a negative review or decide to skip reviewing the product altogether. Isn't that enough to ensure that the reader does not get cheated? Apparently not.

Most actors and other famous people get most of their clothes from fashion houses yet they are not required to sport "I got my clothes for free"-tag on their forehead. And you are not either - except online.

I do agree that some companies use really nasty stealth marketing techniques. For example, one phone company hired people to flirt in public places. They tried to trick people to try out a certain phone model. The employee flirted with the customer and if they were successful, they asked the customers to enter their phone numbers into their phone. And as they were hired to do that, people never got called.

Anyway, affiliates pay for the products they promote/recommend. So affiliates are not quilty of undercover marketing.

But that did not satisfy my sister. Next she asked if affiliate marketing itself is illegal.

Affiliate marketing is completely legal. You are allowed to promote and recommend products that you like.

Some programs and countries do require that you clearly mention your affiliate status.

I don't see that as a problem, even though that might scare some people who don't know a thing about affiliate programs. They will get suspicious and dismiss your opinions. But doing that they will lose, not you.

There are some rumors going on that some US states have forbidden affiliate programs. But that is not quite true. Those states got greedy and announced Amazon that they want to collect taxes of the affiliate earnings coming to their states. Amazon's answer was to discontinue affiliate programs in those states. Arkansas, Colorado, Illinois, North Carolina, Rhode Island and Connecticut are the ones I know of.

While that was Amazon's answer I think the affiliate programs will eventually get taxed. We'll see.


People Are Still Going To Be Suspicious

Even though affiliate marketing is not illegal, people will continue to be suspicious. I think my sister still is!

I told her that if she wants to "fight" affialiate programs, she can start by boycotting the biggest companies offering affiliate programs - Amazon and Ebay.

I don't think my other relatives and friends are going to make it easy either. Whatever I do online, I think my mother-in-law is still going to ask me "do you have any real work yet?" every time I meet her.

PS. I'm officially still on vacation, so no week reports!